Top 10 Places Are For Honeymoon Couples

Shimla :  Shimla is the capital of the northern Indian state of Himachal Pradesh, in the Himalayan foothills. Once the summer capital of British India, it remains the terminus of the narrow-gauge Kalka-Shimla Railway, completed in 1903. It’s also known for the handicraft shops that line The Mall, a pedestrian avenue, as well as the Lakkar Bazaar, a market specializing in wooden toys and crafts.

Manali : Manali is a high-altitude Himalayan resort town in India’s northern Himachal Pradesh state. It has a reputation as a backpacking center and honeymoon destination. Set on the Beas River, it’s a gateway for skiing in the Solang Valley and trekking in Parvati Valley. It’s also a jumping-off point for paragliding, rafting and mountaineering in the Pir Panjal mountains, home to 4,000m-high Rohtang Pass.

Nainital : Nainital is a Himalayan resort town in the Kumaon region of India’s Uttarakhand state, at an elevation of roughly 2,000m. Formerly a British hill station, it’s set around Nainital Lake, a popular boating site with Naina Devi Hindu Temple on its north shore. A cable car runs to Snow View observation point (at 2,270m), with vistas over the town and mountains including Nanda Devi, Uttarakhand’s highest peak.

Mussoorie : Mussoorie is a hill station and a municipal board, near Dehradun city in the Dehradun district of the Indian state of Uttarakhand. It is about 35 kilometres from the state capital of Dehradun and 290 km north of the national capital of New Delhi. The hill station is in the foothills of the Garhwal Himalayan range.

Darjeeling : Darjeeling is a town in India’s West Bengal state, in the Himalayan foothills. Once a summer resort for the British Raj elite, it remains the terminus of the narrow-gauge Darjeeling Himalayan Railway, or “Toy Train,” completed in 1881. It’s famed for the distinctive black tea grown on plantations that dot its surrounding slopes. Its backdrop is Mt. Kanchenjunga, among the world’s highest peaks.

Andaman : The Andaman Islands are an Indian archipelago in the Bay of Bengal. These roughly 300 islands are known for their palm-lined, white-sand beaches, mangroves and tropical rainforests. Coral reefs supporting marine life such as sharks and rays make for popular diving and snorkeling sites. Indigenous Andaman Islanders inhabit the more remote islands, many of which are off limits to visitors. 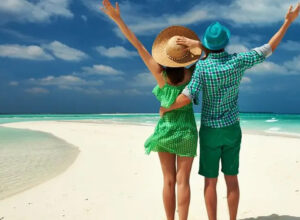 Goa : Goa is a state in western India with coastlines stretching along the Arabian Sea. Its long history as a Portuguese colony prior to 1961 is evident in its preserved 17th-century churches and the area’s tropical spice plantations. Goa is also known for its beaches, ranging from popular stretches at Baga and Palolem to those in laid-back fishing villages such as Agonda.

Udaipur : Udaipur, formerly the capital of the Mewar Kingdom, is a city in the western Indian state of Rajasthan. Founded by Maharana Udai Singh II in 1559, it’s set around a series of artificial lakes and is known for its lavish royal residences. City Palace, overlooking Lake Pichola, is a monumental complex of 11 palaces, courtyards and gardens, famed for its intricate peacock mosaics.

OOty : Ooty (short for Udhagamandalam) is a resort town in the Western Ghats mountains, in southern India’s Tamil Nadu state. Founded as a British Raj summer resort, it retains a working steam railway line. Other reminders of its colonial past include Stone House, a 19th-century residence, and the circa-1829 St. Stephen’s Church. Its 55-acre Government Botanical Garden lies on the slopes of Doddabetta Peak.

Lakshadweep : Lakshadweep is a tropical archipelago of 36 atolls and coral reefs in the Laccadive Sea, off the coast of Kerala, India. Not all of the islands are inhabited, and only a few are open to visitors (permits required). Kavaratti, one of the more developed islands, is home to dozens of mosques, including the ornately decorated Ujra Mosque, as well as Kavaratti Aquarium, showcasing regional fish, shark and coral species.

Leh and Ladakh : Leh is the joint capital and largest city of Ladakh, a union territory of India. Leh, located in the Leh district, was also the historical capital of the Kingdom of Ladakh,